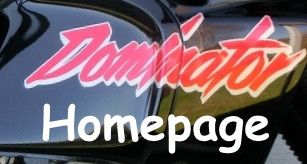 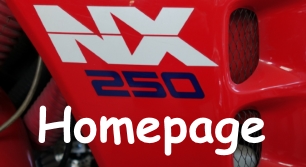 Up to now there was no legal exhaust alternative so I wrote to a couple of fabricators if they could not develop one for the NX250. One of these fabricators (MSR from Italy) offered just a few hours later a street legal (!) NX250 muffler on ebay – what a coincidence, or the Italians are simply much faster in developing and producing

But I suspected from the beginning that this is just a Marving (which is not streetlegal and also produced in Italy) with a new label. The Marving http://i.ebayimg.com/t/MARVING-Auspuff- ... -/$_57.JPG is known for years for poor fit, lame sound and bad performance (less than stock!). But since MSR refused to tell whether its a Marving or at least provide pictures I took the chances and ordered one.

). By comparison, the Marving/MSR has a very small canister, that’s one of the reasons for the cutback on the performance.

And the fit is poor as well. The upper bolt won’t fit until you enlarge the bore-hole. On the video the sound appears much louder, for two reasons: because of the poor fit, the manifold does not fit tight and I opened the air filter box a bit. https://www.youtube.com/watch?v=43fQkwwFohw

I told MSR about those setbacks and ask them if they could not make a GPR (they are also selling re-labeled NX650 GPR mufflers from which I heard good things) based muffler, and the answer was absolutely no and if I wasn’t satisfied I could use a drill for better performance

In conclusion, the MSR sucks big

, which is really a pity. It does look nice and there is no other legal alternative on the market but for me the loss of power is not acceptable.
Nach oben

Hi scrambler I am Kiriakos from Greece, and I have a gift for you.

This is the picture of Marving mechanical silencer in this exhaust, Marving was kind to offer me such information few days back.
My own Marving exhaust purchased at 2007, this now needs repair at silencer section.

At my specific Marving made in 2007, looks to be inside just the silencer pipe with out support flanges, and this now made a free fall inside the exhaust.
My plan is to cut open the exhaust and to try to restore original Marving mechanical silencer by welding it back in place.

Hi Kiriakos,
Good to hear from you, I’ve always been envious of your perfectly restored AX1

. Thanks for the Marving pics. I’ve already noticed that the MSR (which is, as said, identical) is pretty prone to corrosion; the chrome already got rust stains even though it was never driven in rain.
BTW. since not all of the guys here know your great AX1 site it would be nice if you would introduce yourself (viewforum.php?f=1).
Cheers, Michael
Nach oben

Hi Michael, we definable both deserve receiving from Honda free Air tickets about having a Factory tour at Honda Japan.

We both loved this motorcycle more than the ordinary, and I think of you as a brother !!

Regarding my Marving exhaust and my motorcycle, I never gave it hard time by using it off-road.
My exhaust as metal tube this is in very good condition, with very light signs of oxidation.
Therefore this giving me the hope that I can repair it, and this to last for another 4-5 years.

Even so, the area that my exhaust shown as prone to rust this is the end-cover and I am attaching a full size picture for you, so to inspect.
I will need to renew the end metal flange and to weld over it the silencer.

Marving Engineer (Italy) originally advised me to not try to repair it and to buy a new, but this is not possible right now, the cost of 240EUR seems high, when local Greek factories they offer solutions at 85EUR.
http://www.motosport.gr/default.asp?pag ... Name=HONDA
Du hast keine ausreichende Berechtigung, um die Dateianhänge dieses Beitrags anzusehen.
Nach oben

Kiriakos-GR hat geschrieben: Marving Engineer (Italy) originally advised me to not try to repair it and to buy a new, but this is not possible right now, the cost of 240EUR seems high, when local Greek factories they offer solutions at 85EUR.
http://www.motosport.gr/default.asp?pag ... Name=HONDA

I've seen this muffler, too and was wondering if it would be any good. But I doubt it because the canister is even smaller than that of the Marving / MSR. BTW. the MSR is even cheaper than the Marving http://www.maccasport.com/de/hon728-sch ... da-nx-250-.
I've tried quite a few mufflers and I like the origional AX1 muffler best, in terms of sound (its not loud at all, but not as silent as the EU versions) and performance.
The problem is to get one, because most of NX/AX1 mufflers are rosted beyond repair under that stainless steel cover. That's why I started to buy AX1 mufflers in Japan, rip off the stainless steel cover and then the muffler is getting aluminized ( https://en.wikipedia.org/wiki/Aluminized_steel ). Then it will never rust again ( in my experience, those mufflers always rust from outside to inside, not the other way around).

Currently as you can possibly imagine I am about repairing the Marving.

And I have only two ways to follow.
I am going to use this Marving body, and my choices are just two.

The first and the one with lesser trouble ( I am having here a regular copper arc-welder), this is to extract the pipe of Marving silencer currently floating inside, and to recreate this intermediate flanges with black steel, and to lock these to its other, also by welding by small pipe bridges to its other (rods) at their exterior diameter.
Then I will weld back the last flange at the end of the exhaust, this will make it sound again almost as to be new.


The second path is more complicate if you do not live near to the source of such materials.
I thought to recreate to metal mesh and isolating material of original AX-1 exhaust, and to also recreate the original silencer, I did found great help from your pictures, but you do not mentioning internal diameter from the narrow end inside the exhaust.

I will agree with you that nothing compares with original GOSHI exhaust, I do prefer it too I need it to be silent, most of my traveling this is inside the city.

From the other hand I do not think that you can trust a GOSHI more than 6 ~ 8 years.
My city is a port and sea this is all around it, my GOSHI this rusted at the first chamber and not at the final tube.
It came to the point this to turn in to dust and patching by welding this was not possible.

I have no one to help me back then regarding exhausts modifications, and I did discard it.

At 1998 I did replace this with a Sebring exhaust, this survived even as rusted up to 2007.
Then I got the Marving, this was making some noise (compared to GOSHI) but at the limit to be called as acceptable even from local traffic police.


Currently I have poor cash flow, I am just collecting parts that I can find for free or as gift so to patch (repair) my exhaust.
My current problem to solve, this is to find metallic rivets which they do not rust.
I think that they must be 5 or 6 mm / 1 cm length and I will need about 15 of those.
Nach oben
Antworten
6 Beiträge • Seite 1 von 1